“According to all conventional wisdom, Kelly Street ought not to exist.  It is the kind of block that no meaningful government program addresses, and that most urban experts would argue requires too much money to rebuild…

The Living City, by Roberta Brandes Gratz (Simon and Schuster 1989), pages 83-84, commenting on the early efforts of Banana Kelly residents to save their homes and their neighborhood.

Battling city intentions to demolish every building that was not slated for renovation through a federal program, the residents on that section of Kelly Street known as “Banana Kelly” took matters into their own hands and, in 1978, “liberated” three buildings to begin the long process of rehabilitation through “sweat equity.”  There was not much of a choice back then.  The federal government, a few years earlier, effectively abandoned its public housing program.  The Nixon Administration ordered a moratorium, while HUD worked on a new program that was first considered by the President when he had done work for the federal Office of Price Administration in the early 40s.  The program came to be known as Section 8 and from that point until the mid-eighties, if a vacant building was not in the pipeline for renovation through this new federal program, it was scheduled for demolition.

During this time, the South Bronx lost a substantial portion of its housing stock to landlord abandonment and arson.  In the Hunts Point-Longwood area alone (Community District #2), 70% of the housing stock was lost.  What was even more devastating, the area population plummeted from about 105,000 in 1970 to a little over 30,000 in 1980.  The area at that time, was often referred to as looking like “Dresden after the Second World War.”  The only programs the city had to address the situation were its Demolition and Seal-Up programs.   Similarly, New York State withdrew from the affordable housing production business after the near collapse in 1968 of its Urban Development Corporation (now the Empire State Development Corporation).  As stated, the only choices were to stay and preserve and upgrade through self-help or move – thus the adoption of our motto, “Don’t Move, Improve.”

It is within this context of devastation and tumult that Banana Kelly was born.  Officially incorporated in February of 1978, by April of that year our young organization received its first funding from the city’s Department of Employment for a program called the YCCIP  —  the Youth Conservation Community Improvement Program.  YCCIP was a part of the Comprehensive Employment Training Act program funded by the federal government and administered through the city’s Department of Employment.  This allowed Banana Kelly to employ a few of our members and to hire and train over 20 unemployed neighborhood youth.  In the very next month, we received a New York State administrative grant through its Division of Housing and Community Renewal, which paid for a limited amount of administrative expenses.  And Banana Kelly was on its way.

Over the next several years, Banana Kelly grew to a multi-million dollar organization, with programs in vocational and on-the-job training, community management, weatherization, alternate energy (including solar powered water heating systems) and more.  Two developments occurred during this period that prompted Banana Kelly’s expansion. The first, was prompted by the city’s in rem “crisis” on the late seventies, and the second by the homeless housing crisis of the eighties.

By the mid-nineties, Banana Kelly had over 100 employees working in every area of community development, neighborhood preservation and human services.  By this time, the organization had redeveloped over 2,000 units of affordable housing in the Hunts Point-Longwood section; directly managed over 1,000 units; weatherized over 5,000 units of privately-owned housing; provided over 1,000 families a year with targeted social and referral services; provided training for over 750 youth, and developed the first dormitory for homeless high school students.

After this dramatic expansion, the organization entered into a dark period.  By the start of 2002, the organization and its affiliated housing companies owed millions in private debt and municipal obligations; the city was preparing to foreclose on several of the properties still within the organization’s control; the corporate entities for about five properties filed for bankruptcy; two buildings were in the process of mortgage foreclosure.  The living conditions of the residents of these buildings were deplorable.  Finally, in the summer of 2002, the New York State Attorney General prepared to take the organization’s leaders to court to force their removal.  Obviously learning about the A/G’s office’s recruitment of potential board members, the former leadership of Banana Kelly voluntarily agreed to simultaneously resign and appoint new board members chosen by the Charities Bureau of the Attorney General’s office.

In November of 2002, the new board, headed up by former Bronx Borough President, Fernando Ferrer, who took on the role of Board Chairman, and Harold DeRienzo, one of the original founders of the group back in 1977, who took on the role of President and CEO, assumed the reins of the organization. The board and staff (and resident leaders) succeeded in securing over $47 million in private and public funds to refinance and renovate the properties under its control. 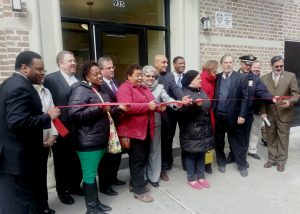 All of the 23 buildings for which the new board took control in 2002 had been totally renovated; Banana Kelly’s first new construction project was completed, providing 58 units of affordable housing to homeless and low income households, with amenities including a day care center, community room and children’s play area (this project was completed through a joint venture with CPC Resources, Inc., an affiliate of Community Preservation Corporation).  In June of 2009 and 2011, all of the buildings removed from Banana Kelly’s control when the organization was in crisis, were returned to Banana Kelly by the Local Initiatives Support Corporation.

Over the past two years, having succeeded in turning around our housing portfolio, and having stabilized our existing social service programs, the organization took on a new challenge – working with tenants in distressed, multi-family buildings that were suffering from the exact opposite, but no less oppressive, problem we encountered in the 1970s, namely excessive bank debt on private buildings that cannot be supported by the rents paid by the residents in our area.  [In the 1970s the banks had abandoned our area in a practice known as “relining.”.  In the early part of this century banks threw money irresponsibly at owners who were nothing but modern day speculators, with no intention of using the funds to improve their buildings and with the banks unconcerned about the underlying security because the loans would be packaged and sold to unsuspecting investors.]

Our first such project on Kelly Street began with basic organizing, along with Mothers on the Move, which led to our appointment by the Bronx Housing Court as the Administrator of five buildings on the block.  This ultimately led to obtaining title and completely renovating the buildings through a partnership with Workforce Housing Advisors and Monodnock Construction.  On January 25, 2013 the first families began to move back into their homes.

Our second such project is one we undertook in collaboration with another neighborhood group, CASA/New Settlement, involving three buildings on College Avenue.  Although this landlord was not as bad as the former landlord, he still topped Public Advocate Bill deBlasio’s list as the worst among the worst landlords in the City.  Again, to meet the underwriting standards of the foreclosing bank and to ensure there was sufficient money available to take title and make all the necessary emergency repairs, we need to bring in partners.  For this project we brought in Wavecrest Management Team and two private investors.  On January 23rd, 2013 we were successful in obtaining title and interim financing from the foreclosing mortgagee.  We will be working with our partners, with CASA, and with the residents throughout 2013 to continue to stabilize the buildings and secure affordable financing for renovation.

There are a number of ways that you can support us.