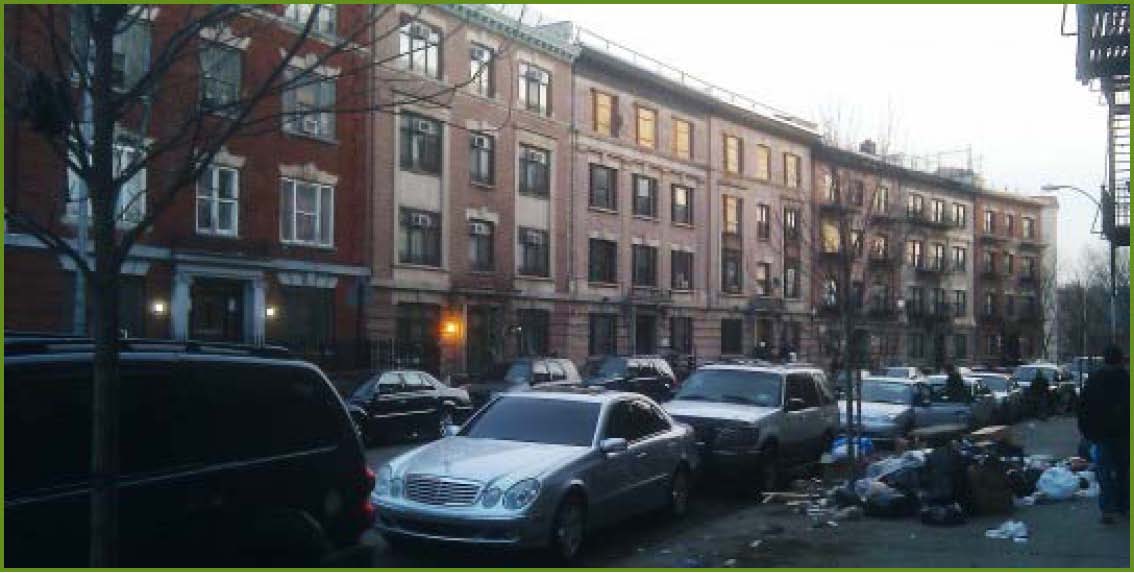 Trash spills into the street, right, in front of a troubled apartment building on the bending block of Kelly Street.

Buildings are among worst in city, housing judge says

The rotten stench of garbage hangs heavy over the 900 block of Kelly Street, just north of Intervale Avenue, where five neglected apartment buildings are crumbling into disrepair. Many windows are broken or boarded up. Trash is everywhere – piled next to stoops, crammed into alleyways, and spilling over sidewalks. Refuse in the lobbies and foyers feed the rats that run through the halls. “A rat jumped on my daughter right here,” said Loida Gomez in the lobby of 935 Kelly Street. Other tenants live with rats running through their apartments. Anna Grullon of 928 Kelly Street has tried to patch holes in her floor and walls herself, but says, “I still share my food with rats.” Since 2008 the five buildings, 916, 920, 924, 928, and 935 Kelly, have taken turns on the city Department of Housing Preservation and Development’s list of the city’s 200 worst multiple dwellings. The city regularly makes emergency repairs to them, fixing water, sewage, and heat problems among other issues. It has spent $1 million so far, according to housing department records. The owner of the buildings, Kelly Street Realty Inc., is nowhere to be found. Records at the city Department of Finance show Ridgewood Savings Bank issued the company a $5 million mortgage in 2009, despite 421 housing department violations in the prior year. Little of that money appears to have gone into the buildings. At the time of the loan, city estimates of the market value for the properties totaled $7.06 million; two years later, the city estimate is $3.9 million. After the loan went into foreclosure, Ridgewood Savings transferred it to another company, WFHA Kelly LLC., which assumed the mortgage earlier this year. But the city is the only one taking care of the properties. “The owners have walked away,” ruled Housing Judge Jerald Klein at a hearing on March 16 at which the landlord failed to appear. The court will now appoint an administrator to oversee the buildings. Meanwhile, they sink further into decay.

4/5/2011 The whole top floor of 928 Kelly St. is boarded up, damaged by a fire. Korrein Castro of 916 Kelly St. has a gaping hole in her living room ceiling. “The sheetrock just fell down,” she said. The housing department fixed it once, but it fell again. Mayra Quinones, who lives in 920 Kelly Street, has “a lotta rats,” she says. She also has a broken window, and broken tiles in her bathroom. Mold and mushrooms grow in the bathroom of Viviana Aguera’s apartment in 916 Kelly Street, the result of a leak in her ceiling. Another concern for the tenants right now is electricity. A number of them have received bills for up to $1,200 for a single month, and Con Ed is unable to check the meters, since they are located in the locked basement. Castro is afraid they’ll turn off her power. “There’s dope heads walking around,” she said. “I’ve got young kids–it’s not safe to turn the power off on us.” Many tenants receive assistance from city agencies, according to Wanda Salaman, executive director of Mothers on the Move, the local activist group that is helping the tenants to organize. Funds come from the HIV/AIDS Services Administration and from the Department of Homeless Services, both of which have been notified of the situation, says Salaman. Last year, Mothers on the Move began working with the tenants. They brought in the Urban Justice Center, a not-for-profit organization that provides advocacy, research, and representation for housing concerns as well as other social issues. Sadia Rahman, a lawyer from the Urban Justice Center, has been advising the tenants. As the city takes control of these buildings, the administrator will have to begin collecting rent to raise funds, before any repairs can be made, said Klein at the hearing. “So it could be three to six months before there are major improvements.” Harry DeRienzo, the president of the housing organization Banana Kelly, which manages 47 buildings in an around Hunts Point, has also been active in helping to organize the tenants, back on the same block he helped save 30 years ago. DeRienzo hopes to become the administrator for the buildings, a role he has played with other properties in the past. The housing department has recommended him to the judge. “Your buildings are among the worst in the city,” said Judge Klein, speaking to the tenants in court. “And no one said this is fair.”

A version of this story appeared in the April 2011 issue of The Hunts Point Express.

From the editor: A school the neighborhood needs Hunts Point is split over future of Sheridan Competing visions spark turf war in Longwood park NYOFCo to close its doors

Powered by Wordpress. Designed by